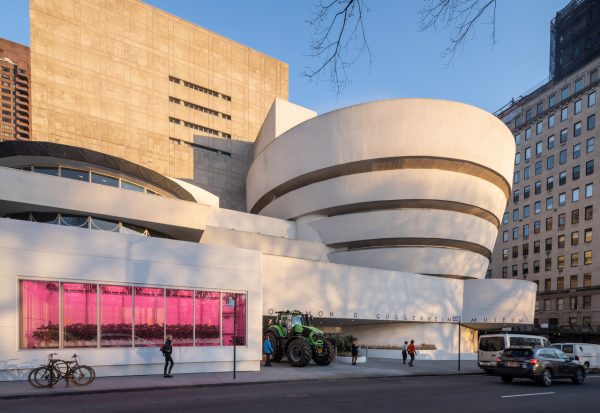 Partially supported by Design Trust’s Feature Grant, Countryside, the Future opened at Solomon R. Guggenheim Museum in February and has already garnered acclaim with coverage in The New York Times, The Guardian, Architectural Digest and Wallpaper*.

Countryside, the Future is an exhibition that addresses urgent environmental, political, and socioeconomic issues through the lens of architect and urbanist Rem Koolhaas and Samir Bantal, Director of AMO, the think tank of the Office for Metropolitan Architecture (OMA). A unique exhibition for the Guggenheim rotunda, Countryside, The Future explores radical changes in the vast nonurban areas of Earth with an immersive installation premised on original research. The project extends investigative work already underway by AMO, Koolhaas, and students at the Harvard University Graduate School of Design; the Central Academy of Fine Arts, Beijing; Wageningen University, Netherlands; and the University of Nairobi. The exhibition explores artificial intelligence and automation, the effects of genetic experimentation, political radicalisation, global warming, mass and micro migration, large-scale territorial management, human-animal ecosystems, subsidies and tax incentives, the impact of the digital on the physical world, and other developments that are altering landscapes across the globe.

Focusing on the 98% of the Earth’s surface that is not occupied by cities, the research explores phenomena happening in the countryside, from historical study on the countryside as a cradle of culture in ancient China and Rome, to urgent contemporary issues such as the ways Chinese investment is transforming chunks of Africa, how refugees have been housed in abandoned towns in eastern Germany and the impact of thawing permafrost in Siberia.

As an ongoing study involving the Central Academy of Fine Arts, Beijing, the study also examines China’s rural revitalisation, which is presented as an installation at the exhibition. The installation presents four sections respectively themed "collective economy," "cultural tourism," "rural e-commerce" and "high-tech agriculture", as well as a comparative study on the data of rural development in China, Europe and the United States in recent years.

As a proactive measure to protect the health of the museum’s visitors and staff in response to the coronavirus (COVID-19), the Solomon R. Guggenheim Museum in New York is temporarily closed to the public until further notice. Please check the official website of Guggenheim for latest updates.